UK Tour & The Other Palace

Premiered at the Watermill Theatre on the 11th of April 2019. Touring the UK til October.

Amélie is the story of an astonishing young woman who lives quietly in the world, but loudly in her mind. She secretly improvises small, but extraordinary acts of kindness that bring happiness to those around her. But when a chance at love comes her way, Amélie realises that to find her own contentment she’ll have to risk everything and say what’s in her heart. Amélie, played by the delightful Audrey Brisson, is a new musical based on the much loved five-time Oscar®-nominated film.
Come and be inspired by this imaginative dreamer who finds her voice, discovers the power of connection and sees possibilities around every corner. Although times are hard for dreamers, Amélie is someone to believe in.

'...while Tom Jackson Greaves’ choreography sees the performers surge into sweeping waltz steps and bursts of synchronised scurrying as they explore a fairytale Paris.'
★★★★ The Stage

'The choreography eschews set dance numbers in favour of movement which celebrates the mood of each moment.'
★★★★★ Express

'This Amelie, c’est magnifique.'
★★★★ The Telegraph
go back 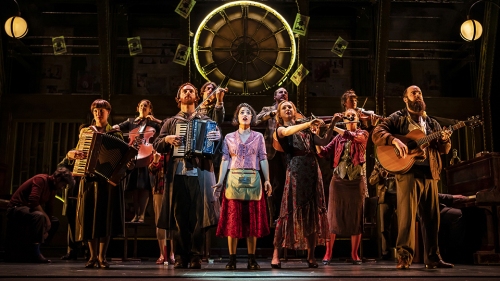