Royal Welsh College of Music and Drama
Directed by Paul Kerryson
Choreographed by Tom Jackson Greaves
Written by John Kander and Fred Ebb
Musical Director Nathan Jones
Premiered at the Richard Burton Theatre on the 22nd June 2016.
Welcome to 1930’s Berlin and the raucous world of the Kit Kat Klub, a dark and dazzling refuge amidst a Germany under threat from a new power. Here debauchery and dancing reign supreme. Cliff Bradshaw, a young American writer searching for inspiration is lured here by the prospect of romance with feisty leading performer Sally Bowles, presided over by the infamous Emcee, whose presence becomes ever darker as the city descends into further chaos. Iconic songs including Money, Wilkommen and Two Ladies remind us that simply ‘Life is a cabaret’.
‘Fortunately and thankfully Kerryson and Jackson Greaves have created a unique version of the show… the choreography was crisp, sexy and hugely entertaining’
Arts Scene In Wales
‘This production has turned the classic Cabaret on its head. It gives us 50 shades of sass. It has been dry-humped by Beyonce and licked by Miley Cyrus… the cast execute Tom Jackson Greaves’ choreography beautifully.’
Get The Chance Wales
go back 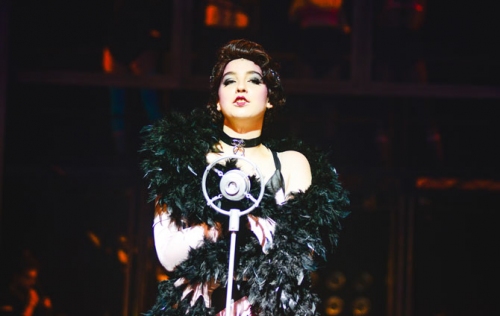