Fiddler On The Roof

Premiered at the Everyman on the 17th February 2017

it’s the choices you make…

1905. For a father in rural Russia, the times are moving on. Is it his daughter or his faith, his village or his life? When those he loves pick away at the thread of tradition, his choices are more and more impossible to make.
With glorious songs such as If I Were a Rich Man and Miracle of Miracles, this classic musical follows the fate of Tevye and his daughters in a story of family, belonging and the dangers of a changing world.

Part of the Everyman Company 2017 season

‘… In ‘Tradition’ Tom Jackson Greaves’ immensely energetic choreography fills every inch of the space. Stage movement and musical energy is also outstanding in the later sequences for Tevye’s dream and the wedding, both of which build to breathtaking conclusions.’
★★★★★
The Stage

‘Tom Jackson Greaves’ busy choreography, executed with conviction by the cast and to the live music from the small on-stage band, fuels the energy.’
★★★★★
Liverpool Echo

‘One of the most enjoyable, heart breaking, joyful and beautifully choreographed performances to have been put on in Liverpool in the last two decades’
★★★★★
Liverpool Sound and Vision
go back 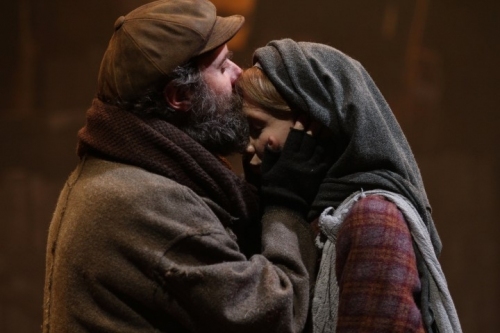