Premiered at the Everyman on March 3rd 2018

America is restless.
The land is giving up its bounty.
And in California, the glint of gold sets pulses racing.

As a nation goes in search of riches, Ben Rumson stakes his claim. A dusty scrap of wilderness becomes a heaving Gold Rush outpost – a town with 400 men and just one woman, where no one knows how long the boom times can last.
Following last year’s unforgettable Fiddler on the Roof, the same creative team invites you to join the Everyman Company for a sensational foot-tapping hoedown. With songs including Wanderin’ Star and I Talk to the Trees, it’s a star-spangled celebration of love in a world that doesn’t know where it’s heading, and a party with you at its heart.

‘Tom Jackson Greaves’ choreography works cleverly with the ordinariness of these bodies… In one startling sequence, simple gestures of reaching and clutching brilliantly capture the itch of loneliness on the prairie.’ The Guardian

‘Performed by an engaging, quick-changing company of 14, and choreographed by Tom Jackson Greaves, it’s stacked high with invention and exuberance. It even, among all the cavorting and “whoop-ti-ay”-ing, unearths nuggets of touching tenderness.’
The Times

‘Director Gemma Bodinetz and choreographer Tom Jackson Greaves have come up with a production embracing the womb-like performance space of the Everyman… ticking every box for those who love their showstoppers but still bringing the modern twists and flicks befitting this 21st Century take on rep.’
Liverpool Echo

‘The production is at its most enjoyable when the company are on stage in force, belting out up-tempo numbers… or performing Tom Jackson Greaves’ clever dance sequences.’ Northern Soul

‘…impossible to not enjoy, its choreography, supervised by Tom Jackson Greaves, is sublime.’ Liverpool Sound and Vision

‘Choreographer Tom Jackson Greaves has once again pulled out all the stops to create some great ensemble numbers that fill the stage with movement.’
Musical Theatre Review.
go back 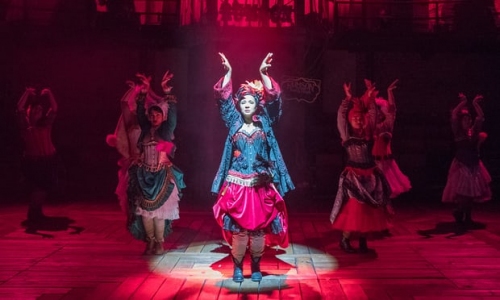