Premiered at the Hope Mill Theatre Manchester on the 3rd of April 2018.
SEE A TRAILER FOR THE SHOW HERE

Perhaps the defining musical of the last decade, Spring Awakening combines an electrifying rock score and genre-defying writing to tell the story of sexual and adolescent discovery. Silenced and dismissed in the firmly censored world of 19th century Germany, a group of teenagers are forced to discover the truth behind their feelings unaided. They find that through each other they unlock a bold and brave new world – with both beautiful and tragic consequences.

Tom won the Broadway World Best Choreography Award for his work on Spring Awakening in 2018.

'That rebellious sound is matched by Tom Jackson Greaves' irrepressible choreography, as if these young bodies are about to burst out of their seams...'
WhatsOnStage

'The choreography is exceptionally innovative and is the real force behind the energy of the production. Sublime from start to finish, Jackson Greaves’ choreography allows us a glimpse into the minds of these teenagers and it’s striking to watch.'
Sincerely Amy ★★★★★

'Sheppard is expertly aided by Tom Jackson Greaves’ well-constructed choreography that enhances the storytelling. Their staging of Totally Fucked is a revelation which has the audiences’ hearts pumping with adrenaline as much as the hormone-fueled actors performing it.'
Manchesters Finest

'...the show would not have had half the impact it had if it were not for the tight choreography by Tom Jackson Greaves.'
Upstaged Manchester ★★★★

'The staging and choreography fit the piece fantastically, and choreographer Tom Jackson Greaves has managed to accurately represent the anarchic and rebellious tone...'
Frankly My Dear ★★★★★
go back 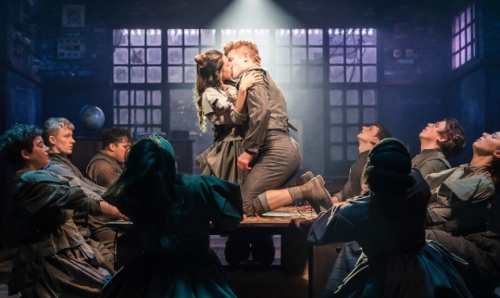