How far would you go for your best friend?

At Ross’s funeral, the wrong people are saying the wrong things. Even the music’s wrong. Determined to do “something proper, something real, something Ross would’ve wanted”, his best friends: Kenny, Sim and Blake, decide to do a runner with his ashes. They’re taking him to Ross in Scotland, to fulfil his lifelong wish of being Ross in Ross. Our teenage heroes embark on an epic mission to honour their friendship and to make sense of what’s happened. Adapted by Carl Miller and based on the much-loved book by Keith Gray, this action-packed new production saw four actors play multiple roles, on a stunning set in the intimate B2 auditorium.

‘The movement is stunning… Tom Jackson Greaves has carved out several stunning choreographed sequences that appear throughout this production. These motifs are interspersed with the fast-paced dialogue, helping to move the story along and expressing the boy’s emotions in a way that words cannot. One of the most brilliantly crafted shows you will see all year”
★★★★★
Coventry Telegraph
go back 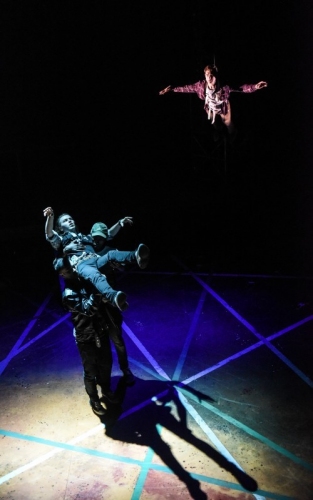