Shakespeare’s Globe Tour
Directed by Nick Bagnall
Choreographed by Tom Jackson Greaves
Original Music by James Fortune
Design by Katie Sykes
Sound Design by Leigh Davies
Premiered at Chilham Castle in Kent on the 20th of May 2016 before touring the UK, Sweden, Norway, Denmark, Hungary and Austria. It ends the tour at the Sam Wanamaker Playhouse in September and the Liverpool Everyman in October.
‘Please you, I’ll tell you as we pass along, that you will wonder what hath fortuned.’
Valentine loves Silvia and Proteus loves Julia – but Proteus is fickle and falls for Silvia too. When Valentine plots and elopement, Protues betrays him and Valentine is banished and joins outlaws in the forest. What are the chances that he’ll be pursued by Silvia, and Silvia by Proteus, and Proteus by Julia, and that all will be waited upon – after a fashion – by their servants Speed and Launce and even Launce’s dog, Crab?
This riotous new touring production is led by a joyful ensemble of players who will delight with songs, romance and chaos and hurl Shakespeare’s anarchic comedy into the 1960’s!
‘Energetic and very funny’
The Stage
go back 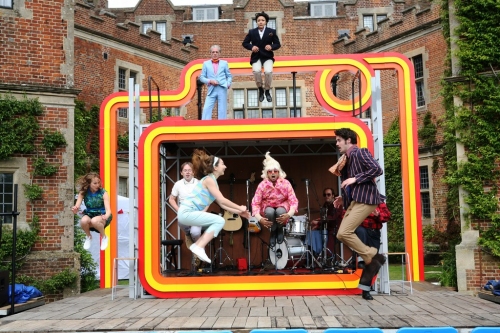