Premiered at the Kneehigh Asylum on the 2nd of August 2018.

SEE A TRAILER FOR THE SHOW HERE

A roof-raising stark-raving sing-along satire!
We all know an Ubu.
Impossibly greedy, unstoppably crude, inexorably hell-bent on making our country great again!
Sound familiar?
Inspired by Alfred Jarry’s riot-inducing masterpiece, Kneehigh will wind-up and let rip their own version of theatre’s most anarchic creation - KING UBU.
Expect world-class buffoonery from Kneehigh stalwarts in this deliriously unhinged improvised promenade musical (surely the first of its kind)! Featuring some of the most iconic rock & pop anthems of all time, given a fresh run for their money by a belting Kneehigh band plus an extraordinary choir of extras – you!* - we guarantee this will be a rocking, rollicking riot of ridiculousness you won't forget! 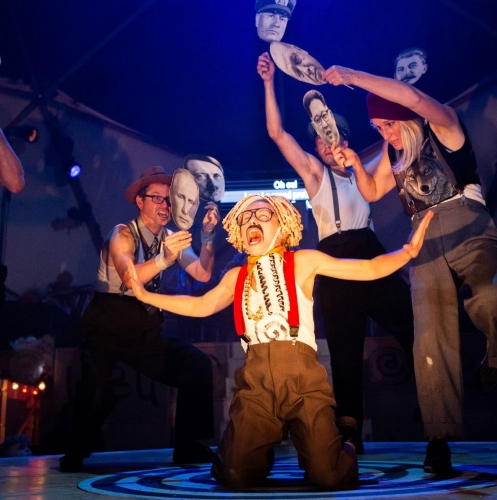